There’s eternal love and then there’s Larry David in the HBO sitcom “Curb Your Enthusiasm.”

“I thought this was over at death. I didn’t know we went into eternity together. ‘Til death do us part, right?” the thinly-veiled character, Larry, says to his wife about being together post-death.

What a romantic, eh?

As we approach the holiday that signifies love and romance — Valentine’s Day — we thought it would be a way to give a tongue-slightly-in-cheek peek into the idea of how eternal love goes on after one or both spouses or partners has passed on.

First things first; perhaps Larry has a point. In many a wedding ceremony the words, “‘Til death do us part” are uttered. Do you take that to mean that once one is gone, the relationship is kaput? If you believe in the afterlife, are you both free to pursue other options because the pact has been sealed after you die?

OK, we’re getting a little preposterous. For many, an eternal love is just that. It lasts forever, during life and after. When one half of a couple passes, of course there’s grieving, because that eternal love also brings with it sorrow that time spent together has passed.

We sometimes take comfort in symbols — urns, headstones or favorite places — and use these as an opportunity to communicate with the one who has passed. Taking it a step further, as the concept of a green burial has grown, there are those whose remains are used to help grow a tree or meadow of flowers.

That is literally living on. Sharing the same plot in a green cemetery means you actually could live on together as your remains nourish and grow a living thing.

Going back to Larry David and “Curb Your Enthusiasm,” there might be another way to think about eternity, love and Valentine’s Day. His show is known for taking taboo subjects to the extreme for comedy. Maybe that’s not the worst approach when starting to think about death and the one closest to your heart.

A bit of humor when tiptoeing into the topic of the inevitable might be one way to go.

Perhaps a greeting card for Valentine’s Day that says, “Thinking of you,” next to a photo of a gravesite? Inappropriate for some; a source of a good laugh for others.

We often say that when someone plans for their death and shares their final wishes with loved ones, it’s one of the best gifts they can provide. For spouses, is it too much of a stretch to have a lovely, romantic dinner while talking about how they would like to depart this world?

Take the morbid out of it. Ease into it. Ask some questions. We call this the Talk of a Lifetime, and it can be one of the most-rewarding conversations or series of conversations you ever have with your dearest.

Just don’t quote Larry David while having the talk.

(“I’m not interested in closure. Some people just have heart attacks and die, right? There’s no closure.” ~ Larry David)

Best to leave that part out, right? Good luck with Valentine’s Day and here’s to you and your special one having a lovely February 14th together.

It’s your death: Plan ahead to rest easy 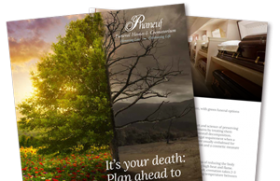