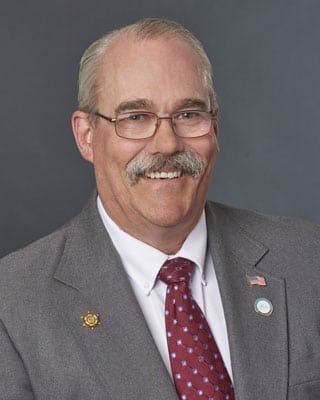 Paul is a lifelong NH resident having grown up in Goffstown, resided in New Boston and the last 11 years in Bedford. Paul retired from Bedford Police after 24 ½ years of full time law enforcement and continues in a part time capacity with the Sheriff's Dept. Paul retired as Captain and the second in command. He then went on to continue to serve the Town of Bedford for 6 more years as a Town Councilor and former Chairman, also serving on numerous boards and Committees. He has a BA in Business Management from Franklin Pierce College graduating Magna Cum Laude. He also served for 4 years as a Director on the Board for the NH Police Association. He also has held memberships in numerous Associations and Fraternal Organizations including Washington Lodge #61 F&AM since 1989. He and his wife Michele have been married since 1986, he has 3 children, PJ, Aaron and daughter Tessa, also 2 granddaughters Grace and McKenzie. He enjoys riding his Harley, gardening and spending time with his family.
Email:
paul@phaneuf.net
Phone:
603-625-5777 Ext. 221
Copyright 2017-2021 Phaneuf Funeral Homes & Crematorium | All Rights Reserved