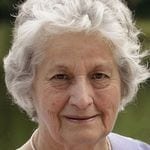 Sophie Kyratzis Konides, 87, of Walnut Cove, NC, died August 24, 2018. Sophie was born in Nashua, NH, on February 27, 1931, the eldest daughter of four children of George and Soultana Kyratzis. She graduated from Franklin High School in Franklin, NH. Sophie married her husband, James Anthony Konides, in 1953 in Manchester, NH. She worked for Pratt & Whitney Aircraft in Connecticut until she left work to raise her family in North Palm Beach,...