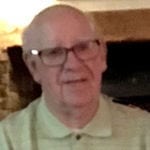 Sidney Clifford Slark (called Jim), aged 93, died August 31, 2018 after a brief illness at Elliot Hospital in Manchester, NH. He lived a life of joy and love and service and will be greatly missed by all who knew him. He was born on January 27, 1925 in London, England, the son of William and Caroline (Smith) Slark. Jim Slark grew up in Shepperton, a suburb of London, the third youngest of nine children. His Christian name was in honor of a...