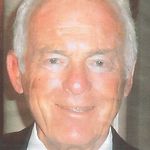 Robert S. "Bob" Gottsegen, 85, of Meredith, NH passed away in the early morning of February 16, 2019 at his residence. Bob was born on August 16, 1933 in New York City, NY, the son of Max and Cele (Krupp) Gottsegen, He graduated from New York University in 1955 and then went into active duty with the U.S. Navy until 1958, achieving the rank of lieutenant senior grade and remained in the Navy Reserves until 1967. His private sector career was...