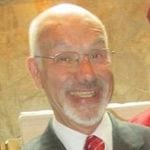 Robert J. Charron, 71, of Berlin NH, passed away on October 5th, 2019 surrounded by his family. Robert was born on November 21st, 1947 to Roland & Germaine (St. Onge) Charron, and would later marry the love of his life, Patricia, with whom he spent 51 years of marriage. Robert grew up in Berlin NH and later moved to Manchester NH with his wife. He spent 41 years as a postal worker for the Manchester Post Office, where he made many lifelong...