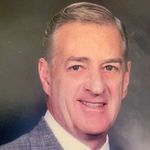 Philip R. Bonnin, 85, of Bedford, passed away on October 13, 2019 at his residence with his loving family by his side. He was born in Manchester on April 21, 1934, the son of the late Arthur and Charlotte (Champoux) Bonnin. He was a United States Air Force Veteran and flew supply missions during the Vietnam War. For 37 years, he worked for the NH Air National Guard at Grenier Field and later at Pease A.F. Base as a flight engineer on the...