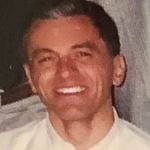 Nicodemo "Nick" Scarfo, 58, of Litchfield, NH passed away on Wednesday, October 2, 2019 at his home with his family by his side after a courageous battle against cancer. He was the beloved husband of Patricia "Patti" Heaton, and the loving father of Lisa Scarfo. He was the devoted brother of Loredana and her husband, Ian Tracy, of Boston, MA, and was the son of the late Fortunato and Lidia Scarfo. Nick was a graduate of Lynn English High...