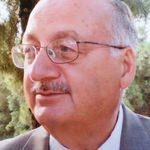 Nicholas K. Koustas, 76, of Manchester, NH died on Monday, March 12, 2018 at his residence. Mr. Koustas was born on March 4, 1942, in Pentalofos, Kozani, Greece, the son of the late Kosmas and Sophia (Tsotsi) Koustas. He was a resident of Manchester for the past 63 years. He was employed for over 30 years as a teacher at West High School, in Manchester. Mr. Koustas also owned and operated Skyway World Travel. He enjoyed playing the accordion...