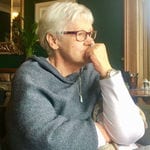 Beloved mother and friend Myrian Currie Bergeron passed away on Friday, April 19, 2019 at the Elliot Hospital in Manchester, NH. There are facts about Myrian's life, and then there are the qualities that made her one of the most special people anyone ever met. The facts of Myrian's amazing life began November 3, 1943 in Munich, Germany. Her mother, Alma Pass, an Estonian, had been conscripted by the Nazis when she was 21 or 22 years old. ...