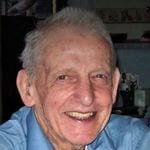 Marcel A. Pinard, 94, of Manchester, passed away on October 24, 2019 at the Elliot Hospital. He was born in Manchester on May 5, 1925, he was the youngest of six children of Joseph and Beatrice (Caron) Pinard. He worked at the Amoskeag Mills for several years before enlisting in the United States Navy, and served on the USS Quincy during the invasion of France during World War II. He was also serving when President Roosevelt went aboard to...