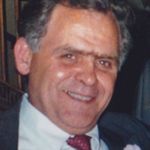 George D. Gamas, 71, of Manchester, NH died at the Massachusetts General Hospital on Friday, July 24, 2020. He was the beloved husband of Vasiliki "Bessie" (Soulios) Gamas with whom he shared forty-six years of marriage. George was born on June 2, 1949 in Metsovo, Greece and was the son of the late Demetrios and Vasiliki (Spahos) Gamas. He relocated to the United States from Greece in 1972 and on June 30, 1974 he married the love of...