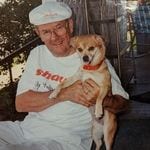 Everett George Delorey, age 90, passed away on Wednesday, October 9, 2019 at Villa Crest Nursing Home. He proudly served in the US Army in World War II and the Korean War. He was a member of the V.A. and also a member of the G.A. and he helped many overcome their addictions. He has left behind his wife, Faye Delorey as well as his stepchildren, grandchildren, a sister, brothers, nephews and nieces. He will be laid to rest at the Woodbrook...