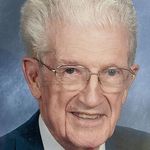 Dexter R. Fowles, Jr., 98, of Kittery, Maine, passed away peacefully on April 10, 2020 at Courville in Manchester, NH following a recent illness. He was the husband of the late Carolyn Fowles. She was the love of his life and they shared sixty-five years of marriage. He was also predeceased by his son, Brian and his daughter-in-law, Anne. Born in Gardiner, Maine on September 14, 1921, he was the son of the late Dexter and Ruth (Jackson)...