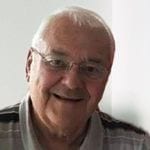 Armand J. Desrosiers, Jr., 79, of New Boston, passed away at Catholic Medical Center on October 16, 2019. He was born in Manchester on July 6, 1940, the son of the late Armand J. and Stella (Rogala) Desrosiers, Sr. He was a United States Army Veteran specializing in signal intelligence and served in the NH Army National Guard. Early on in his career, Armand became a prominent leadership figure in the Manchester Regional Youth Hockey...