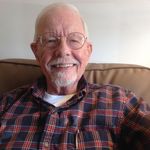 The Reverend Alfred A. Cramer died peacefully on November 23, 2020, leaving this earth on the strength of the Psalms and other prayers read to him by his wife of thirty-two years, Janet French Cramer. Janet and Al were married at the Marlboro Meeting House in 1988. They lived first in Marlboro and later in Brattleboro, where Al became a Priest Associate of St. Michael's Episcopal Church. Al spent his life investigating the mysteries of this...