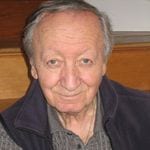 Phil Sanopoulos, 86, of Manchester, NH died peacefully at the Elliot Hospital on Monday, February 24, 2020.
Born July 3,1933 in Neapolis, Kozanis Greece; Phil came to the United States in 1951. He was just 17 years old.
Phil was an automobile transmission mechanic in Manchester, NH. Initially he worked for Pete Dinell and later spent his career at the Buick dealership on South Willow Street.
Phil was a dedicated husband, father and family…