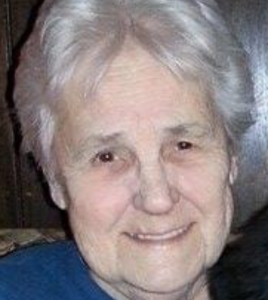 Shirley was the first of seven children born to Raymond and Beatrice (Nelson) Guay on April 2, 1936, in Manchester. On July 24, 1954, she married Alfred H. Trombley and raised their family of four children in Candia, where she lived until she moved in with her daughter Shelly and husband Ernie in March of 2020.

Once her children were grown, Shirley went to work for K-Mart in Hooksett, working her way up to the position of Human Resources Manager before her retirement. After retiring she and Alfred travelled extensively, roaming the country in their motor home.

Shirley loved to prepare huge meals for her ever-growing family of grandchildren: Theresa, Keith, Justine, Alesha, Samantha, Molly, Kyle, Matthew, and Michael; and seven great grandchildren. She was an excellent baker, with her whoopie pies being a favorite of all who knew her. Anyone who visited Shirley’s home was offered a cup of coffee and a fresh-baked treat. She also loved gardening and was a longtime member of the Candia Garden Club and Candia Homemakers.

She was preceded in death by her parents and her husband, as well as her eldest son Alfred, Jr., sisters Sharon and Beverly, brother Ray, and grandson Keith.

Shirley is survived by her son Mark and his wife Norma, of Candia; son Michael and his wife Dale, of Warner; daughter Shelly Gray and husband Ernie, of Weare; and daughter-in-law Lindsay, of Candia. She also leaves behind three sisters: Patricia Lavallee and husband Paul; Barbara Labonville and husband Marcel; and Deborah Loranger, all of Hooksett.

A Graveside service will be held on Tuesday, November 30th at 2:00pm in Holbrook Cemetery in Candia. Family and friends are kindly invited to attend.