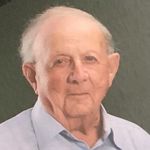 Roger Albert Pinard, 96 of Goffstown, NH died on Wednesday, September 9, 2020 at HIllsborough County Nursing Home in Goffstown.
Mr, Pinard, "Pep," was born on October 30, 1923, in Manchester, NH. The son of the late Onil and Laura (Savoie) Pinard. He spent half of his life in Manchester, NH and the remainder in Goffstown, NH.
He was a Veteran and voluntarily served in the United States Navy during World War II.
Prior to his retirement, he…