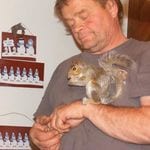 Mr. Davis was employed in construction and worked for Lamontagne Builders.