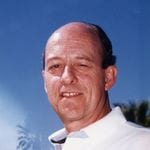 Gary William Meader died in his home in Sugar Hill, NH on February 22, 2019 after a long battle with cancer.

Gary was born in Los Angeles, California, and grew up in the Midwest. He met his beloved wife, Sue, during their high school years in Iowa. They were married shortly after high school and had been married sixty years at the time of Gary’s passing.

After their first daughter was born, Gary and Sue decided that college was going to…