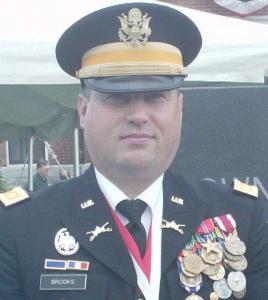 Christopher M. Brooks, 47, of Londonderry, passed away on January 22, 2022, as a result of injuries sustained in an automobile accident in Bedford.

He was born in Salem, MA on July 26, 1974, the son of John and Kathleen (Trainor) Brooks. He was a graduate of Norwich Academy. He was a Major in the United States Army, serving several tours of duty in Afghanistan. He was in charge of security at the Afghanistan Airport in Kabul. He retired in 2018 from the Vermont Army Reserve after 20 years of service. A decorated soldier, he received numerous awards and accommodations during his military career, including the Bronze Star, the Military Order of St. Christopher, and the NATO Meritorious Service Medal. He enjoyed spending time with his family. He was very active in the Republican Party in NH and worked on several election committees as a volunteer.

Family members include his parents of Londonderry; his twin daughter and son, Isabella Brooks and Michael Brooks, both of Rindge; his sister, Mandi Delio and her husband John of Manchester; two nieces, Arianna and Alissa; and uncles, aunts, and cousins.

A memorial gathering will take place at Phaneuf Funeral Homes and Crematorium, 243 Hanover St., Manchester on Sunday, January 30th from 2 to 4 PM with a memorial service to celebrate his life to follow at 4 PM. Internment with full military honors will take place on Monday, January 31 at 10:00 AM in the NH State Veterans Cemetery. To view an online tribute, send condolences to the family, or for more information, visit www.phaneuf.net.