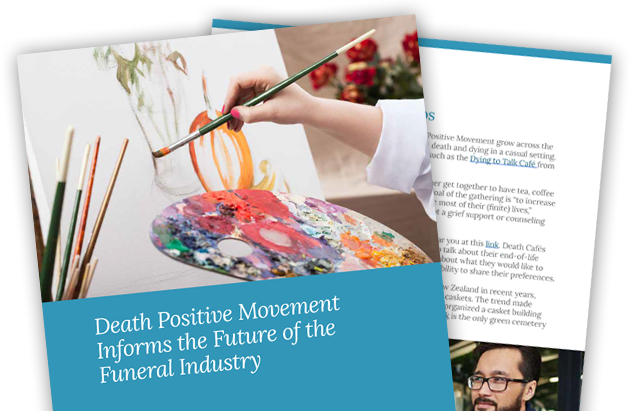 The days of discussing death in hushed tones are coming to an end as more people share their wishes and plans with loved ones before a serious illness or crisis arises, which is why we created this e-book.

The Death Positive Movement encourages people to discuss and express their feelings and intentions about death and dying. More and more, people are doing this in casual settings including Death Cafés and Dinners with Death.

As more people open up about their end-of-life wishes, we also see people exploring  alternative ways to depart this world, ranging from green burials and celebrations of life to turning cremated remains into jewelry or ink for tattoos. We explore a variety of ways people are embracing the death positive movement as they get closer to planning their own end of life or plans for loved ones.

The key takeaway from this e-book is that instead of being morbid or creepy, talking about end-of-life plans can actually be a chance to connect with family friends and make your wishes known when you are still able.

Fill this quick form for instant access to the guide: