For those belonging to the Eastern Orthodox faiths, which includes Greek, Russian and Roman Orthodox believers, the funeral rites are closely tied to the church and steeped in tradition and ritual. Please note that cremation and body donation are strictly prohibited by the Eastern Orthodox religion, additionally those who have taken their own life would not be considered as qualifying for a religious service.

Shortly after death, the body is to be cleansed and clothed by the family and friends of the deceased. In some cases, the clothing may reflect a person’s station in life—for example, veterans may wear their uniform and those belonging to the church may don their ceremonial garb. A priest is typically present for this process and blesses it by sprinkling holy water.

Once the body is prepared, the family will usually hold a wake, which begins with the First Panikhida, a prayer service. Although in some cases a wake can last for up to three days, in recent times it is more common to hold it over the course of a single day. During this time, family and friends may read psalms and share in their grief.

After the wake, the body is transported to a church for a funeral service. It is traditional to place a bowl of boiled wheat and honey, topped with a candle at the head of the casket to symbolize the cycle of life and the sweetness of Heaven. After a funeral service, mourners are invited to say their goodbyes to the deceased before the coffin is closed and transported to the burial site, where a final, short service is conducted by a priest by the graveside before the body is interred.

It is traditional for Eastern Orthodox mourners to hold a memorial service after 40 days.

We are happy to work closely with your religious advisor to organize a service that closely adheres to your wishes as well as those of the church. 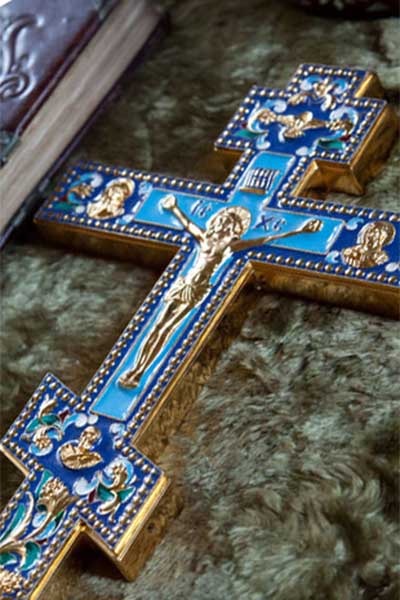 In our bimonthly email you’ll learn about upcoming events, grief resources and information to help you navigate the death-care industry.