What Makes a Burial Green?

The number of Americans opting to pursue green burials for themselves or loved ones is growing. It’s a topic we’ve explored here before with our readers and client families, but it’s worth reviewing again because we get many questions about green burial services and what exactly makes them “green.”

If you connect the term to being environmentally friendly, you’re right. But it’s much more than just a casual respect for the earth. There are specific guidelines and steps taken in order for a burial to be classified as green.

A green burial is a natural alternative to the conventional burials most of us are familiar with. It causes minimal environmental impact by conserving natural resources, reducing carbon emissions, protecting worker health, and preserving natural habitat. This definition comes from the Green Burial Council, an independent, nonprofit organization that works to bring awareness to natural burial options and sets the standards for what the organization calls “environmentally sustainable death care.”

In its simplest form, a green burial doesn’t use concrete vaults, traditional coffins with metalwork, or embalming chemicals. Instead, the body is wrapped in biodegradable shrouds or placed in a pine coffin and laid to rest where it can decompose and eventually become part of the earth.

Natural graves are relatively shallow, compared to the traditional depth of about five or six feet.  That’s because the body will decompose more quickly if it’s buried no deeper than three and a half feet, allowing microbial activity similar to that found in composting, and thus meeting the criteria set by the Green Burial Council.

Everything old is new again, as they say. While the idea of a green burial may sound like another trend of the eco-conscious, it’s actually the way people have cared for their deceased for thousands of years. In fact, the practice of embalming is relatively modern and did not begin until the American Civil War, when the families of soldiers killed far from home requested that the bodies be preserved and returned to them intact. It has been part of traditional burials ever since.

If you decide a green burial is the right choice for you or a loved one, you’ll first need the right funeral home to help you carry out your wishes. Because embalming is not allowed prior to green burial, you’ll need to look for a funeral home willing to make accommodations in preparing the body.  Refrigeration is the easiest, most economical method of body preservation. When a body is refrigerated, it is kept at a temperature which sufficiently delays decomposition for up to a few days.

There’s also an upcoming free seminar presented by Lee Webster, Director of New Hampshire Funeral Resources, Education & Advocacy, emeritus President of the National Home Funeral Alliance, and emeritus Board of Directors for the Green Burial Council. Join her at the Dover Public Library on March 13 at 6:30 pm for “Going Out Green: Sustainable Funeral & Burial Options.”

If you’d like to learn more about green burials, we encourage you to download our free e-book 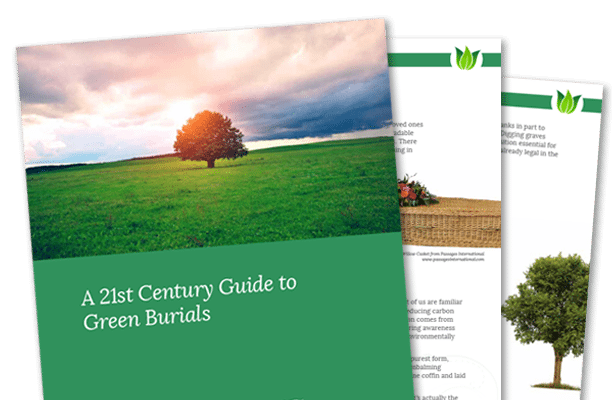