Three members of the Phaneuf Funeral Homes & Crematorium tried a unique type of yoga recently – it’s called goat yoga. Yes, you read that right. Apparently, it’s a real thing. Madison Fortin, Stephanie Knotts, and Mandy Desmarais went to goat yoga last month at Jenness Farm in Nottingham, NH. As you can see by the photos, they were a bit distracted by the little kids, so we’re not sure exactly how much yoga actually happened that day. 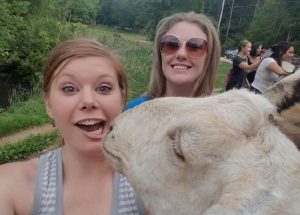 What is Goat Yoga?

According to our team, it’s just as strange and adorable as it sounds. A typical one-hour yoga class with a slight twist, or kick, if you will. Baby goats jump and play while you (try to) stretch and move through each pose. Attendees are given a chance to take pictures and cuddle with the goats at the end of class. Even if you have no desire to try yoga, who doesn’t want to cuddle with baby goats?

For a sneak peak, take a look at this video from the Jenness Farm website:

Staff member, Mandy Desmarais described the class, “It was a great experience. We did spend more time snuggling the goats than doing yoga, but we were OK with that.” She said that the class began with the instructor explaining what would happen, and then shortly thereafter, baby goats were being brought into the room by the armful. There were seven baby goats total. 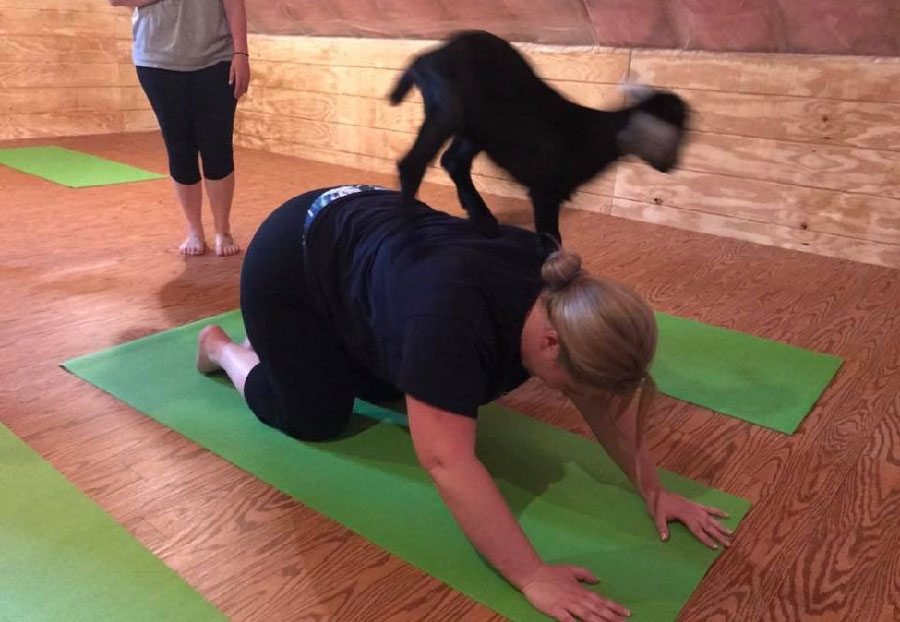 “The second those goats’ hooves hit the floor it was like watching the cutest parkour training class EVER,” Madison said. “They were all over the place running around, skidding across the floor, jumping and twisting mid-air, jumping on the participants, nibbling on our hair and shirts and toes, jumping on the walls…and a few of them were pretty interested in eating the walls, too.” It sounds a little crazy, but also like a lot of fun.

Though our staff members had never experienced anything like this before, they all said they had a wonderful time, and that they highly recommend it. They also each fell in love with a goat. Mandy gives the following account of their new goat friends:

“Stephanie bonded with a goat named Goldie. I fell in love with the tiniest one, Waffles, who spent half the class curled up in my lap hindering me from the actual doing of yoga. Meanwhile, Madison was obsessed with Moon, the biggest but youngest goat in the room. However, Moon was a lot more like a moody teenager and was pretty much having none of it, so she sat in the corner of the room ignoring us all.”

All in all, it sounds like a good time was had by all. And they look pretty relaxed, here, don’t you think? 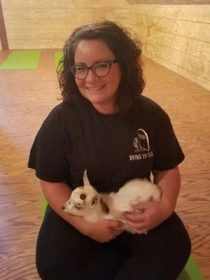 For information on burial and cremation services available, contact us today.