Mourning in the Victorian Era

Today’s funerals are somber affairs, but they can’t compare to funerals and mourning in the Victorian Age. The Victorian-style of mourning came into fashion in the 19th Century (1837-1901) and was probably influenced by the long and public mourning period of Queen Victoria over the death of her beloved Prince Albert. This set the stage for elaborate and prolonged mourning etiquette – and expensive funerals and burials for the upper classes.

When a person died in the Victorian Era, the curtains would be drawn and a wreath with black ribbons was hung on the door to alert people that a death 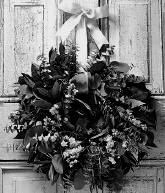 had occurred. Because Victorians were quite superstitious, mirrors were covered in black crepe so the spirit of the recently deceased wouldn’t get trapped there. The dead were carried out feet first so their spirit couldn’t look back and beckon to another family member to join them; photos might be turned face down to prevent the living from being possessed by the spirit of the deceased; and clocks would be stopped at the time of death to prevent further bad luck

Some other common superstitions:

Anything that belonged to the deceased – jewelry or other items – would be collected and kept as a memento and a reminder of the deceased. Keeping locks of hair as a memento was common and people kept the hair in pins, hair clips, rings and bracelets. Sometimes the hair was even woven into a piece of jewelry.

But most macabre was the memento mori (“remember your mortality”), photos of the deceased that portrayed them in lifelike settings that reflected their personality. Photography at that time was still something of a novelty, but it was accessible and affordable, so the middle class could afford to have a photo keepsake of their loved one. These photos were designed to make the deceased looked as natural as possible. It may seem morbid now, but these photos were all loved ones had of the deceased and were considered prized possessions. 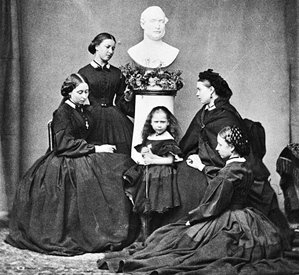 should be worn – was accepted and what wasn’t. An intricate overview of Victorian mourning attire can be found in this period Collier’s article.

Most of the rules pertained to women – men simply wore black suits, black gloves and a black cravat – and depended on the stage of mourning: deep mourning or half mourning. Widows were expected to wear mourning attire for two years. (Mourning periods for other members of the family were much shorter).

During deep mourning women wore dresses made of clack crepe, a crepe bonnet and heavy veil over a white widow’s bonnet, and black kid gloves. Back fur and sealskin were also acceptable.

After three months the widow’s cap could be done away with and after six, the crepe attire. The heavy veil could be exchanged for a lighter one. During the entire period the widow was expected to forego social engagements, with the exception of church; men on the other hand, were expected to go back to work.

The only acceptable jewelry was made of jet, a coal-like minor, although the deceased’s hair may be combined with it. At half mourning, clothing could be gray, mauve or white.

The custom of a wake came about in this era as the body was watched over continuously from death to burial. This was a practical matter as it helped make sure the person was actually dead and not unconscious or in a coma.

Funerals were by invitation.  A working-class funeral could be £5 during a time when a yearly salary was just £20, so poorer families would often make weekly donations to a funeral fund to cover costs. The upper classes had much more elaborate and expensive send-offs that cost much more; £53 for instance, would buy you:

It was not acceptable for women to attend the graveside service. Tombstones during this era became much more elaborate and were deeply engraved and the tradition of laying flowers began. Often photos would be taken of the flowers and made into a memorial photo.

During this era the funeral industry came into being. Undertakers became commonplace, going to the deceased’s home, procuring the casket and arranging the funeral procession. While today’s funeral is much more of a private affair, the Victorian Era is when many of our contemporary funeral traditions and customs were born.

Phaneuf Funeral Homes and Crematorium has been serving the public since 1906. We are the largest provider of funeral services in the state, and we operate three full-service funeral homes, two crematories, two non-denominational chapels, and a cremation society. To request a free brochure and planning guide, click here. 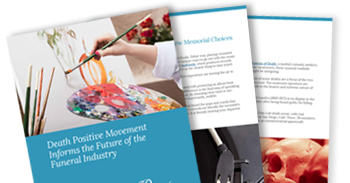