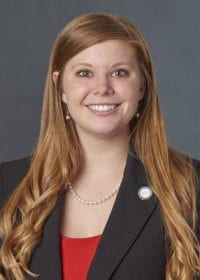 According to the National Funeral Directors Association, “ more than 60% of mortuary science students in the United States are women. Many of these women have discovered and are attracted to the skills and traits needed as a funeral director, including communication skills, compassion, a desire to comfort those coping with a death, as well as organizational and event-planning skills.”

The end-of-life experience is changing with the growth of the death positive movement and the gradual move away from the stereotypical “old guy in a crusty suit and no smile” that some of us think of as funeral directors. Many aspects of an old-fashioned traditional funeral shift with the times, such as the stoic receiving line at the funeral home. Today those still happen but celebrations of life are becoming more common.

Personalization has much to do with the shift toward celebrations of life, and it begins with a funeral director who does much more than forge a standard contract.

“I think women have played an integral role in the personalization and connecting with families,” Madison said. “It’s become such a rewarding career, being able to walk people through one of the most difficult times in their life. They really don’t take that for granted. The number of cards that I receive, or Christmas baskets and people calling me years later to say, ‘You helped me these years ago with my Mom. Now, my Dad’s not doing well. We trust you. We have confidence in you, and we want to work with you again.’ Just knowing that I have an impact and can help people heal and grieve is really rewarding to me.

When you’re with a woman, [I think] you’re more likely to talk about your feelings. Not with COVID, but usually I hug people. People like to hug me even if I don’t offer. They just feel more vulnerable and willing to talk about their emotions or they’ll cry in front of me.”

On the job learning

Madison is a decade into her career as a funeral director and currently works closely with Melissa, a funeral apprentice with Phaneuf. Mortuary school generally cannot teach someone how to connect with families. The focus is primarily on mortuary science (the technical aspects, such as embalming) though areas of study do include small business classes, basic accounting, psychology and sociology courses.

“The actual funeral directing, you learn on the job,” Madison said. “We all have our strengths and weaknesses, and some flourish when it comes to the traditional casket viewings. Others are more inventive.

For example, I had a gentleman who was a survivor of the bombing at Pearl Harbor and he and his wife would go every year for a reunion. He and his wife decided to be cremated and [have the cremated remains] scattered in Hawaii. We planned a Hawaiian-themed funeral. Everyone got a floral lei, we had tropical flowers and other decorations, and Hawaiian music. It made it more of a celebration of life rather than the traditional receiving line with an open casket.”

For some, you can be too positive

“Every family is the same, except none of them are the same. The paperwork process, the authorization, the death certificate, the cremation permit, that’s the same for every family. But, the relationship that you build with them then determines what route you go down. ‘I see you plan to scatter remains in the ocean. This might be helpful for you,’ or ‘You’re having a memorial service at the church. Would you like a memorial book and cards?’ You cater to their exact needs.”

A positive experience, such as the luau-themed service, could turn into a good memory for people as opposed to something depressing. It could even become a story that you tell people. A funeral director’s approach toward positivity is going to be different for every situation. It’s likely easier to celebrate a life of a 95-year-old grandmother who had a beautiful, long life and wonderful family versus a 19-year-old tragically killed in a car accident or a 5-year-old who has cancer, where it’s nearly impossible to find a silver lining.

Madison likens her positive outlook to the old idea of traditional Midwest friendliness as she’s originally from Kansas.

“I always have a smile on my face. I’m just a very friendly, outgoing person. We get surveyed, and some families’ surveys have complimented my warm smile and how I don’t have a really depressing voice. Other people have said that I’m too friendly and too cheery. I’m true to myself and do right by each family. That’s all I can do.”

Learning how to speak to families

Madison and other funeral directors coach Melissa on how to speak to families. For example, at Phaneuf’s Manchester Hanover Street location, the showroom is in the basement. You wouldn’t say to a family, ‘We’re going to go to the basement to look at her,’ because in a funeral home, the basement has a negative connotation. Loved ones aren’t kept “in the basement,” where it’s eerie and dark, like an old horror movie. You refer to the “lower level.”

If you call a family to schedule to bring their loved one home, you don’t say, “Do you want to come pick up Mom?” Instead, you say, “It’s time to bring her home.” Being soft with words is something that comes with time and experience, Madison said.

The times are (slowly) changing

Melissa may have never felt disrespect for her chosen profession, and it’s not something Madison thinks about much today. But that wasn’t always the case. The first funeral homes she worked at were small and traditional, and Madison’s first employer told her she wouldn’t last five years in the industry because she was female. She also experienced sexual harassment from some male funeral directors, though not at Phaneuf.

“One gentleman calls me about once a month. His wife died many years ago, and Michelle Phaneuf-Plasz [another funeral director with Phaneuf] handled the cremation. He refuses to talk to any male staff. He just thinks they’re too gruff and they have no emotion. He feels that they don’t have the same caring touch that a woman does. So, he has given me strict instructions that I perform the cremation. I will place him and his wife in the urn together. He wants them to be cared for in a loving manner, and he only sees that a woman is capable of that,” Madison said.

You Can Easily Start Planning Now.