Coffin or Casket – What’s the Difference?

Did you know? While coffin and casket are often used interchangeably, they are some differences between the two. A coffin usually has six sides (or eight), while a casket has four. The six-sided coffin resembles the human shape – wider at the shoulders and narrower at the feet.

The word coffin comes from Old French cofin, from Latin cophinus, or “basket.” According to Oxford English Dictionary, the origin of “casket is unclear; one theory is that it came from  the French cassette, a  ‘small casket, chest, cabinet’. In early America, a casket was a box for jewels. Another theory is that it became a euphemism or a burial box by early undertakers. The word “casket” is used primarily in North America.

Coffins go all the way back to ancient Egypt when bodies were mummified, placed in sarcophagi and buried in pyramids.

The “economy coffin” was introduced by Holy Roman Emperor Joseph II in 1785. In an effort to conserve wood, Joseph II decreed that coffins with trap doors be used for burials. The coffins were made of wood and the bottom had a flap that could be opened to allow the body to be dropped into the grave. The idea proved unpopular and was quickly repealed.

In the early 1800s, the funeral director was known as the “undertaker” and was 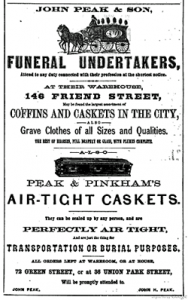 often a furniture maker and a casket builder. During the Civil War, so many caskets were required that the casket industry came into existence.

Today, there are many places to buy caskets. Batesville Casket Company is the world’s largest manufacturer of caskets. Funeral homes provide caskets, but retailers and wholesalers like Wal-Mart and Costco also now sell them.

Were you aware that you do not have to buy a casket from the funeral home? Federal law requires the funeral provider to accept one you provide from another source. So shop around; it may be that the funeral home has the best price. But if you’re looking for something they don’t carry, you can look  elsewhere.

Whatever the case, if you decide to provide your own coffin (or casket), there are many types to choose from – at all price points. According to the Federal Trade Commission, an average casket costs slightly more than $2,000; some sell for as much as $10,000. Much depends on what the casket is made of. Here are some of the options available:

Metal: Caskets can be made from stainless steel, bronze or copper. The price depends on the type of metal used.

Fiberglass: Fiberglass is light and strong. They can be manufactured to size, so are often used for infant funerals. Many finishes are available.

Cloth covered: A less-expensive alternative, the caskets are made corrugated fiberboard or pressed wood.  The exterior part is then covered with a layer of cloth.

Eco-friendly: Made of natural materials such as willow, seagrass, cardboard and bamboo – these caskets are biodegradable and non-toxic. These are usually less expensive.

Handmade: You can make your own casket or have one made by a skilled craftsman.

Phaneuf Funeral Homes and Crematorium has served the public since 1906. We are the largest provider of funeral services in the state, and we operate three full-service funeral homes, two crematories, two non-denominational chapels, and a cremation society. To request a free brochure and planning guide, click here.