The days of discussing death in hushed tones are passing. More of us share our wishes and plans with loved ones before a serious illness or crisis occurs. This openness toward end-of-life planning has led to more alternative funerals and other unique approaches to say farewell.

The new HBO documentary, “Alternate Endings: Six New Ways to Die in America,” encourages conversations about how to die by highlighting six people who ventured outside of tradition to leave this world.

We already have many engaging conversations with people about their numerous choices for end-of-life plans, and we thought now is a good opportunity to host a free nontraditional funeral discussion. Here are the details:

Topics of discussion will include:

Get Your Free Guide to Green Burial Here.

Here is a brief look at six alternatives discussed in the documentary to get you thinking about your own wishes:

Memorial reef:  People are looking beyond cremated remains sitting in an urn on the mantle and want other ways to “live” after death. One opportunity to be an active, producing part of the environment is becoming part of a coral reef in the ocean. Basically, cremated remains mix with concrete and get cemented inside a reef ball. Your family drops the reef ball into the ocean. The business providing the service claims the “reef” should last 500 years or more. You can even add a memorial plaque on the reef. Visit this link for more information.

A living wake: This concept is on display in sitcoms like “Grace and Frankie” and was even part of Sophia’s scheme on “The Golden Girls.” A living wake is a farewell party where the soon-to-depart person is the guest of honor. Rather than a memorial held post-funeral, it’s an opportunity to say goodbye to friends and family and enjoy one last, great party.

Green burial: We’ve explored the alternative burials topic in blog posts, as Phaneuf was an early adopter of green funeral and burial plans. Your body is not embalmed or buried in a metal casket. Instead, it gets wrapped in a biodegradable shroud and then placed in a shallow grave, so the body can decompose naturally.  The documentary features a woman who owns a lot of land and invites others to have green burials there. The dying woman profiled in this story wanted a tree buried with her, so she could immediately start feeding it.

Space remains: Once a body is cremated, the remains can be loaded onto a rocket and get launched into space–sort of like hitching a ride to outer space and staying forever. In the documentary, Celestis offers this service on a rocket also carrying a payload for NASA.

Medical-assisted dying: In September 2019, Maine becomes the ninth state (plus the District of Columbia) to legalize physician-assisted suicide. You drink a drug cocktail, quickly go into a coma, and then die. In the documentary, a patient with terminal metastatic lung cancer wanted to die on his own terms before he was incapacitated by cancer.  He had a living wake, constructed his own coffin, drank the cocktail, laid down, and died with his family by his side.

Celebration of life: This isn’t a new concept, but it continues to grow. Rather than a post-funeral memorial (which can be a somber affair), people choose instead to have a party in their honor after they die. In the documentary, a 5-year-old boy dying of cancer decided to have a celebration of life with laughter and fun as opposed to a memorial with tears.

The non-traditional funeral discussion is presented by Lee Webster, author and president emeritus of the National Home Funeral Alliance, and Buddy Phaneuf, fourth-generation funeral director and the president of Phaneuf Funeral Homes and Crematorium. RSVP here.

Learn how to leave a lasting legacy 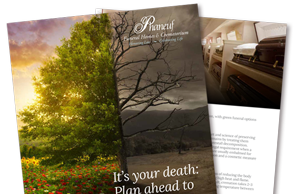